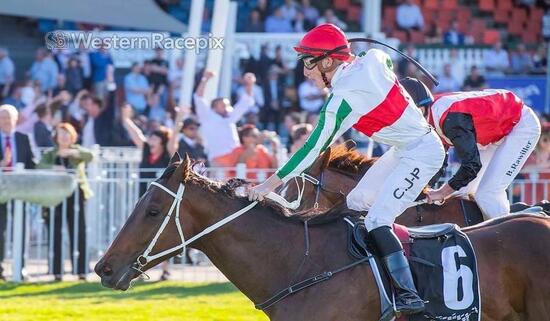 There were scenes unlike any before in the Ascot mounting yard as Massimo led all the way to score a thrilling victory en route to the $1 million Group 1 Railway Stakes (1600m).

Sent straight to the front by Johnston-Porter, Massimo ($8.50) shot clear at the top of the straight and held off Valour Road ($4.20) to score by half a length.

Co-trainer Michael Gangemi’s decision to outlay $150,000 for Massimo, who had won eight races for trainer Adam Durrant, in the Inglis online sale in June was vindicated. The Sessions gelding went one better after seconds in the Black Heart Bart Stakes (1200m) and Northerly Stakes (1400m) at his first two starts for his new stable.

“He eats like a machine, he races like a real good horse and he’s a pleasure to have around,” Gangemi’s co-trainer brother Chris said.

“It was a super win. He did all the work in front and nothing could get him. “That’s why Michael tries to buy these horses because they’re almost impossible to get. “Obviously he had to pay $150,000 for him and he’d already won 700-odd (thousand dollars) by the time we bought him, but we were pretty confident we could get that back over the next year or two.

“Luckily enough we’ve been able to do it from his first three starts.”

Johnston-Porter, a former champion apprentice, continued his association with Massimo after riding him throughout the start to his career with Durrant.  “It was quite lucky going from Adam’s camp to the Gangemis’ camp,” Johnston-Porter said. “I ride for both of them and it was good to keep the sit on this horse, he’s a nice horse and he’s looked after me well.”

Massimo capped a huge week for the Gangemis, who scored winning doubles at Ascot on Tuesday and Belmont Park on Thursday.