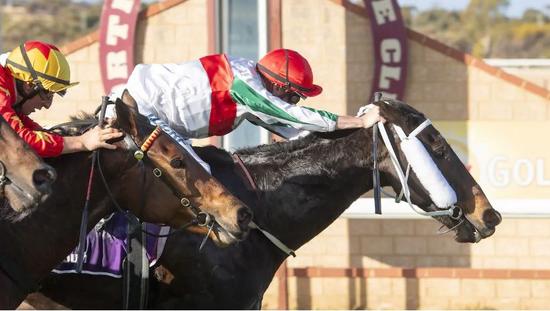 Like a fine red wine, Rock Magic just gets better with age.

The remarkable nine-year-old again proved why he is one of WA’s best active sprinters after smashing the track record in his Group 3 Northam Stakes (1100m) victory yesterday.

Despite being off the scene for 12 months with a knee injury and racing wide throughout yesterday, Rock Magic ($2.45 favourite) made a sustained run in the straight to beat Electric Light ($6.50) by a neck.

Relief was the overwhelming emotion for trainer Chris Gangemi, who admitted he felt sick all week in the lead-up to Rock Magic’s return.

“As much as I should have been happy if he just ran a good race, I really wanted him to win,” Gangemi said.

“We’ll help him get over the run and as long as he recovers in the next few days, he’ll be fitter and better for the Roma Cup.

“He’s a freak. I’m sure we’ll never have another one as good.

The Redoute’s Choice gelding improved his record to 16 wins from 49 starts and more than $1.4 million in earnings.

“I got goosebumps going past them,” Noske said.

“I was pretty happy there (out wide). I thought The Celt was going to cross me and I didn’t want that, so I was just happy to be out of trouble.

“He doesn’t know he’s nine. He’s like a young horse still, so hopefully he’s still got a few wins left.”