Samizdat goes from no hope to no fears 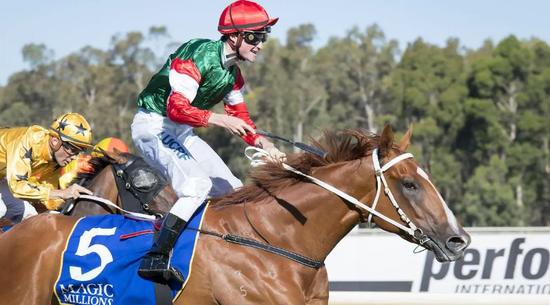 Those were the words of jockey Jarrad Noske and many others when Samizdat was in desperate trouble in yesterday’s $150,000 Magic Millions WA 3YO Trophy (1200m).

After settling in the second half of the field, Samizdat wasn’t responding to Noske’s urgings and was stranded in second last position at the top of the straight.

Remarkably, Samizdat ($2.70) lifted in the final 150m to score a sensational win, gunning down Zetorio ($101) by three-quarters of a length.

Chix Pic, the heavily-backed $2.25 favourite, ran third after being swamped by in the final 50m.

Noske was in awe of Samizdat’s performance, which delivered him a fourth win in the Trophy.

“I just thought he was no hope at the top of the straight,” Noske said.

Trainer Chris Gangemi was relieved after Samizdat lived up to the hype with a sizzling victory.

“On a day when nothing’s really made up ground out wide, he wasn’t in a great spot,” Gangemi said.

“The horse doesn’t help himself. He’s green as grass, he’s got no idea what he’s doing and he probably needs blinkers.

“But we were relying on his ability to get him over the line and it was some sort of win.

“He’s a very good horse. For him to be doing what he’s doing when he’s nowhere near right, he’s got a big future.”

Gangemi said Samizdat, who won his only other race start at Belmont Park last July, would be aimed at upcoming feature races in WA.

“Maybe next prep he might be good enough to go over east,” he said.

Samizdat was the top-priced lot at the 2017 Magic Millions Perth yearling sale when he was sold for $325,000.

Noske confirmed he will ride the Gangemi-trained Battle Hero in the Group 1 Lightning Stakes (1000m) at Flemington next week.

“Hopefully Samizdat can go with him. I’ll try twist their arms,” Noske said.