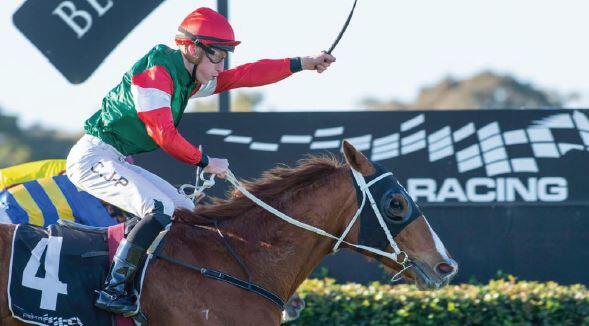 Quality sprinter Samizdat will be on the first available flight to Melbourne after rocketing from 10th position to win the $125,000 Belmont Newmarket (1200m) at Belmont Park.

Jockey Clint-Johnston Porter waved excitedly to the crowd as he swept home wide on first-up runner Samizdat ($6) to defeat Tellem We’re Comin ($15) by a long neck.  The $2.25 favourite Indian Pacific finished a close third after leading with topweight of 61.5kg.

Samizdat, co-trained by Chris and Michael Gangemi for a syndicate of owners, has won seven races.

“He’s a super horse who’s suited by the long Belmont straight,” Chris Gangemi said. “When he was four or five lengths off the Newmarket lead, I thought he had no chance.

“Samizdat will be ideally suited down the spacious Flemington straight.

“It was a brilliant Newmarket win against tough opposition. We’re confident he’s up to winning a good sprint at Melbourne’s spring carnival.

“COVID has complicated travel arrangements, but he’ll be flown out as soon as we can arrange an airfreighter booking.

“We’re determined to race him in Victoria and an all-out effort is being made to book a flight, despite COVID issues.

“I thought he was below his best for the Newmarket, after running only fourth in a barrier trial. “But he’s overpowered rivals and can improve

significantly more with the benefit of his first race in more than four months.

“He missed a scheduled trial when it was washed out by heavy rain and that’s why we believed he needed the run today.”

Johnston-Porter was in high spirits when dismounting form Samizdat.

“He jumped fast and felt early that he really wanted to win,” the jockey said. “He travelled well, but I feared we were in trouble on the corner, being too far back.  Then, suddenly I realised we were going to be right in it. His class told and he was brilliant against a strong field.”

3YO Trophy. He consolidated his reputation by winning an Ascot carnival race from Regal Power, who later recorded victories in the Railway Stakes and Melbourne’s All-Star Mile.

The Gangemi stable won earlier with Crystal Spirit, who scored his first victory in three years.