Rocky the Best Ever … 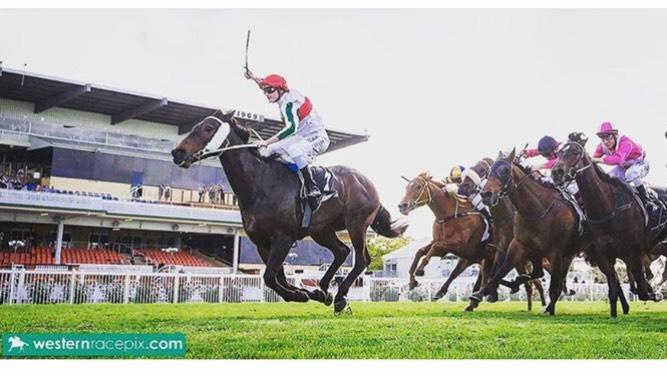 Rock Magic has taken the mantle as the highest ever stakes winner for the stable with his 2nd Group Race win in outstanding fashion in the Prince of Wales Stakes (G3) yesterday at Ascot.

It was first up from a spell and from a wide draw over 1000m, but nothing could stop Rocky as he put away Perth’s best sprinters yet again. Beautifully ridden by stable jockey Jarrad Noske, Rocky was posted out wide from the start, but with cover Jarrad didn’t panic. He gradually eased Rocky from near the tail as the field rounded the final bend and when pulled out wider into clear running, it was just a matter of letting Rocky’s big heart and will to win take over as he ran over the top of them to win by almost a length going away with Jarrad raising the whip to salute!!

No one celebrates better than Rocky’s loyal group of owners and it was on for young and old yet again!  (There were even some new faces as loyal owner Nick Condidorio had his new baby son Luca there complete with a “Rocky” t-shirt!!).

What was also amazing pre-race yesterday was the fact that none of the tipsters had picked Rocky as a first four chance.  This was despite the fact that he has won first up at Group level last year and he had won last start at Listed level.  In fact he is now the highest rated sprinter going around in Western Australia and will be perfectly suited yet again at the weight-for-age level in his next start in the Group 1 Winterbottom Stakes. Let’s hope he is seen as an underdog again as that’s the way we like it!!