Rocky Takes On the Best at Moonee Valley 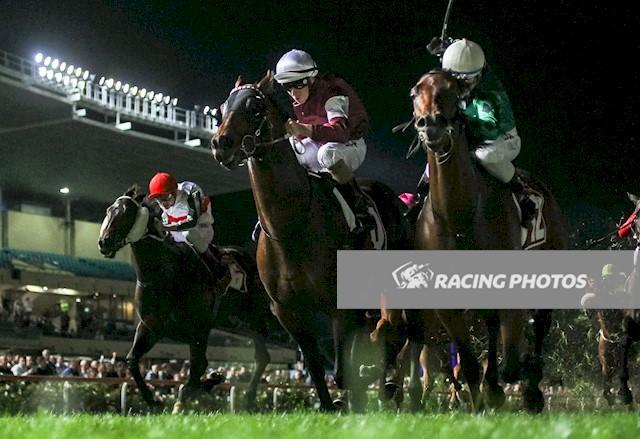 Rock Magic has left no doubt to being the best ever for Gangemi Racing through his sensational performances at Listed and Group level here in Western Australia.   His performances have in fact now meant that he is the highest rated sprinter in the State.  Unfortunately this also means that to race here in Perth, he has to carry huge weights even at Listed level.  It was now time for Rocky to move into even bigger leagues and tackle the  best sprinters in the Country at one of Australia’s great racing venues; under lights at Moonee Valley.

The race was the Group 1 William Reid Stakes over 1200m.  Rocky was first up since November and his brilliant 3rd in the Group 1 Winterbottom Stakes.  But he had gone through a few setbacks.  Firstly a severely damaged hoof that took some months to repair and then a seemingly soft trial win in early March resulted in him pulling up poorly and any interstate campaign looked in jeopardy.  But the stable never gave up.  Some words of advice from Hong Kong’s leading trainer and stable mentor in Caspar Fownes and the team did everything they could to turn him around.

It was decided to press ahead and give Rocky his chance at glory.  He was booked on a flight and travelled to Melbourne just 4 days before the race.  He settled in well at the stables of Gangemi Racing’s friends in Leon and Troy Corstens (Malua Racing).

A big crew of Rocky’s fans flew over to cheer on the champ.  He was up against it, with some of Australia’s best sprinters and a tight turning track, that suits the front-runners, going to make it difficult.  As one commentator said, he was “friendless in the betting” – no-one from Victoria rated Rocky any chance of even being competitive having come from Perth.

Drawn midfield in barrier 6, the aim was to have Rocky positioned up on the outside not far from the pace to give him the best opportunity to sprint over them.  As is the case in racing, things don’t often pan out as expected.  Stable jockey Jarrad Noske (who had flown over on the Friday and foregone a ride in Perth’s Karrakatta Plate) was continually buffeted in an attempt to find a position and had absolutely no option but to take Rocky back to the tail of the field.  He was in an almost impossible position to even play a part in the finish from so well back at the “Valley” over 1200m against some of the best in the Land.

But you can never underestimate Rocky with a heart as big as himself.  Despite being almost turned sideways at the turn as another horse came out abruptly, Jarrad rode a magnificent race in taking Rocky through a narrow gap rather than pulling to the complete outside.  He pushed through to the outside running and despite being many lengths off them (10th at the 400m), Rocky “sprouted wings” and came with his trademark finishing burst.  It was a bob on the line by superstar three year old “Star Turn” that  just  prevented Rocky from snatching third place, but what was clearly evident was that Rocky would have won the race with a better run in transit.

Despite running fourth, the run of Rocky was considered by many astute judges as being the “run of the race”.  Whilst he didn’t win, all of the owners could not have been prouder of their champ and he proved that he is up to the very best to many horse racing followers across the Country.