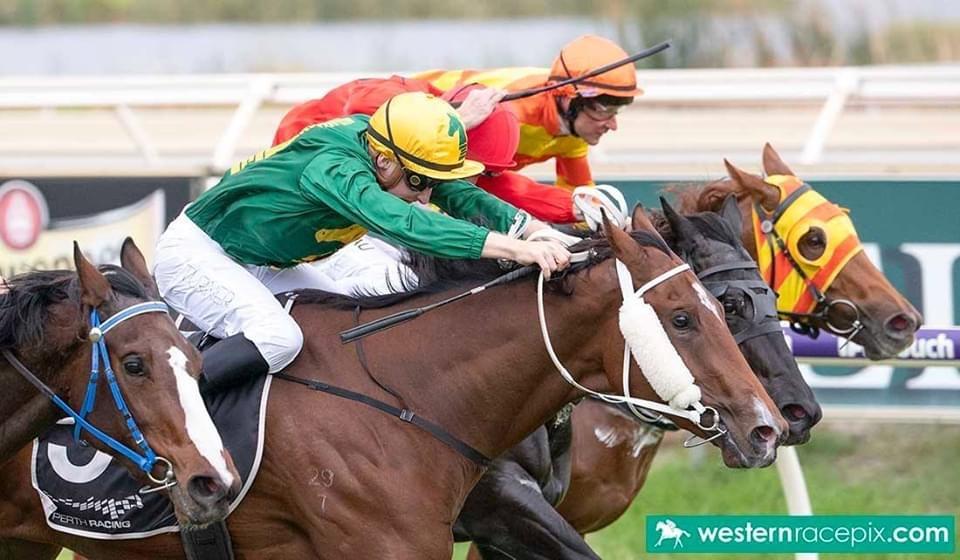 It was the culmination of a unique story on Saturday when 2 year old Ima Single Man finished off his undefeated campaign with the toughest of victories in the $500,000 Group 2 Karrakatta Stakes.  After picking him out at the Magic Million Sales, the Gingerbread Man/Single Spice yearling was always one that the stable were keen to get hold of, however, his reserve price was just out of reach after purchasing a few others already!

It was a combination of good karma and destiny that the gelding would still end up in the stable.  The owner/breeder of Ima Singleman in Ron Sayers, owner of Yarrahdale Stud was looking for a horse pool for his granddaughter to exercise her horse.  GR offered their pool free of charge and as a thank you, Ron offered GR the opportunity to choose and train a couple of their rising 2 year olds.   Michael immediately thought about the Gingerbred Man gelding and jumped at the opportunity.  And now the rest is history . . .

A magnificent thoroughbred with an exceptional stride, Ima Single Man has gone from strength to strength.  After winning 2 trials, he came out and won convincingly in a midweek Ascot meeting.  His next run last Saturday was his grand final for his first campaign as he took on the best 2 year olds in Western Australia in the main juvenile race of the season – the time-honoured Karrakatta Plate:

Ima Single Man drew a very awkward barrier 10 in the 1200m elite field.  His main opposition was considered to be Gemma’s Son, the undefeated (4 from 4) Snippetson Colt – this 2 year old was seen by many as one of the best in WA for many years.   Ridden by Jordan Turner in all of his trials and first race, “Jordy” knew Ima Single Man better than anyone.    He fired out the gelding from his outside barrier and was quickly at the girth of the leader and odds-on favourite Gemma’s Son – a position many would have thought impossible to win from.  But Jordy knew the strength and will to win of the Gingerbred Man gelding.   Coming into the home straight he began to apply the pressure and it became apparent that Gemma’s Son was about to lose his unbeaten record.   Having done all the “bullocking work” it was now just a matter if Ima Single Man could hold off the “swoopers”!!   And hold them off he did – fighting to the line in a close one as those with the softer runs came at him hard.

It was a great achievement for Gangemi Racing and a great ride by Jordan Turner, however, the thanks must go to Ron Sayers and Yarrahdale Stud for the opportunity to train this beautiful gelding.  He’s now headed to the paddock undefeated for a well-earned break and we look forward to seeing him back in the spring for some more major races.