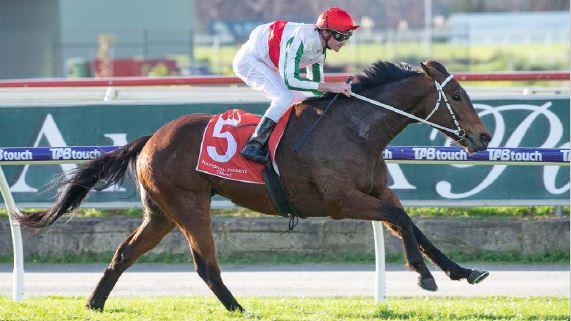 Classy veteran Floyd landed the first leg of a feature double when he unleashed a flying inside run to win the $100,000 Jockey Day Celebration Sprint (1000m) at Belmont Park.

Brothers Chris and Michael Gangemi, saddling Floyd on their first day as a training partnership, were in high spirits as jockey Jarrad Noske secured the inside opening. The bay, who had not raced since April, charged through from sixth position and notched his sixth city victory.

His big syndicate of owners enthusiastically celebrated their triumph on the new racing season’s first day. Floyd ($4) finished a length clear of Jericho Missile ($7.50) while Essential Spice, also at $4, ran a close third and favourite Mervyn ($3.40) was fourth.

“The Newmarket is Floyd’s next race,” Chris said. “But he deserves his chance in bigger events. He’s been a slow maturer who’s only now ready to show his best.”

Chris Gangemi has been a trainer for 10 years, with Michael as his stable manager. “Michael’s been actively involved in the training side of our operation,” Chris said. “We decided to launch a training partnership this season and the new arrangement’s made a perfect start.”

An elated Michael Gangemi said Floyd had become underrated while sparingly raced. “There’s nothing wrong with him,” Michael Gangemi said. “He’s just been given plenty of time to mature and this was only his 24th start. “This horse has an electric turn of foot, as he showed when clear running appeared today. “He’s a real stable favourite and the sprint win is a big thrill.”

Noske said Floyd was always travelling strongly after settling. “We just had to wait for the gap,” Noske said. “He accelerated fast when there was space.”